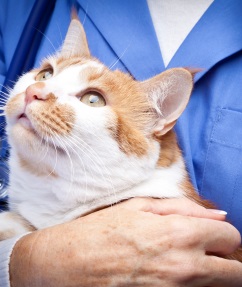 What is Feline Immunodeficiency Virus?
Virologists classify feline immunodeficiency virus (FIV) as a lentivirus (or “slow virus”). FIV is in the same retrovirus family as feline leukemia virus (FeLV), but the viruses differ in many ways including their shape. FIV is elongated, while FeLV is more circular. The two viruses are also quite different genetically, and the proteins that compose them are dissimilar in size and composition. The specific ways in which they cause disease differ, as well.

How is FIV spread?
The primary mode of transmission is through bite wounds. Casual, non-aggressive contact does not appear to be an efficient route of spreading FIV; as a result, cats and kittens in households with stable social structures where housemates do not fight are at little risk for acquiring FIV infections. On rare occasions infection is transmitted from an infected mother cat to her kittens, usually during passage through the birth canal or when the newborn kittens ingest infected milk. Sexual contact is not a major means of spreading FIV.

What does FIV do to a cat?
Infected cats and kittens may appear normal for years. However, infection eventually leads to a state of immune deficiency that hinders the cat’s and kitten’s ability to protect itself against other infections. The same bacteria, viruses, protozoa, and fungi that may be found in the everyday environment–where they usually do not affect healthy animals–can cause severe illness in those with weakened immune systems. These secondary infections are responsible for many of the diseases associated with FIV.

What are the signs of disease caused by FIV?
Early in the course of infection, the virus is carried to nearby lymph nodes, where it reproduces in white blood cells known as T-lymphocytes. The virus then spreads to other lymph nodes throughout the body, resulting in a generalized but usually temporary enlargement of the lymph nodes, often accompanied by fever. This stage of infection may pass unnoticed unless the lymph nodes are greatly enlarged.

An infected cat’s and kitten’s health may deteriorate progressively or be characterized by recurrent illness interspersed with periods of relative health. Sometimes not appearing for years after infection, signs of immunodeficiency can appear anywhere throughout the body.

• Poor coat condition and persistent fever with a loss of appetite are commonly seen.

• Inflammation of the gums (gingivitis) and mouth (stomatitis) and chronic or recurrent infections of the skin, urinary bladder, and upper respiratory tract are often present.

• Persistent diarrhea can also be a problem, as can a variety of eye conditions.

• Slow but progressive weight loss is common, followed by severe wasting late in the disease process.

• Various kinds of cancer and blood diseases are much more common in cats infected with FIV, too.

• In unspayed female cats, abortion of kittens or other reproductive failures have been noted.

How is infection diagnosed?
Antibody tests detect the presence of antibody in the blood of infected cats.

Because few, if any, cats and kittens ever eliminate infection, the presence of antibody indicates that a cat or kitten is infected with FIV. This test can be performed by most veterinary diagnostic laboratories and also is available in kit form for use in veterinary clinics. Since false-positive results may occur, veterinarians recommend that positive results be confirmed using a test with a different format.

Infected mother cats transfer FIV antibodies to nursing kittens, so kittens born to infected mothers may receive positive test results for several months after birth. However, few of these kittens actually are or will become infected. To clarify their infection status, kittens younger than six months of age receiving positive results should be retested at 60-day intervals until they are at least six months old.

A negative test result indicates that antibodies directed against FIV have not been detected, and, in most cases, this implies that the cat is not infected. Nevertheless, it takes eight to 12 weeks after infection (and sometimes even longer) before detectable levels of antibody appear, so if the test is performed during this interval, inaccurate results might be obtained. Therefore, antibody-negative cats with either an unknown or a known exposure to FIV-infected cats-such as through the bite of an unknown cat-should be retested a minimum of 60 days after their most recent exposure in order to allow adequate time for development of antibodies.

On very rare occasions, cats in the later stages of FIV infection may test negative because their immune systems are so compromised that they no longer produce detectable levels of antibody.

Polymerase chain reaction (PCR) tests are designed to detect short segments of a virus’s genetic material. While antibody-based tests are ideal screening tests for infection, in certain situations (such as confirming infection in antibody-positive kittens or determining infection of cats vaccinated with antibody-producing FIV vaccines), PCR-based tests, in theory, would be superior. Although PCR testing methods offer promise and are being actively explored, at this time unacceptable numbers of false-positive and false-negative results prevent them from routinely being recommended.

How can I keep my cat or kitten from becoming infected?
The only sure way to protect cats is to prevent their exposure to the virus. Cat bites are the major way infection is transmitted, so keeping cats indoors-and away from potentially infected cats that might bite them-markedly reduces their likelihood of contracting FIV infection. For the safety of the resident cats, only infection-free cats should be adopted into a household with uninfected cats.

Vaccines to help protect against FIV infection are now available. However, not all vaccinated cats will be protected by the vaccine, so preventing exposure will remain important, even for vaccinated pets. In addition, vaccination may have an impact on future FIV test results. It is important that you discuss the advantages and disadvantages of vaccination with your veterinarian to help you decide whether FIV vaccines should be administered to your cat.

I just discovered that one of my cats has FIV, yet I have other cats as well. What do I do now?

Unfortunately, many FIV-infected cats are not diagnosed until after they have lived for years with other cats. In such cases, all the other cats in the household should be tested, as well. Ideally, all infected cats should be separated from the noninfected ones to eliminate the potential for FIV transmission. If this is not possible-and if fighting or rough play is not taking place-the risk to the non-infected cats appears to be low.

How should FIV-infected cats be managed?

• They should be fed nutritionally complete and balanced diets.

• Uncooked food, such as raw meat and eggs, and unpasteurized dairy products should not be fed to FIV-infected cats because the risk of food-borne bacterial and parasitic infections is much higher in immunosuppressed cats.

• Wellness visits for FIV-infected cats should be scheduled with your veterinarian at least every six months. Although a detailed physical examination of all body systems will be performed, your veterinarian will pay special attention to the health of the gums, eyes, skin, and lymph nodes. Your cat’s weight will be measured accurately and recorded, because weight loss is often the first sign of deterioration. A complete blood count, serum biochemical analysis, and a urine analysis should be performed annually.

• Vigilance and close monitoring of the health and behavior of FIV-infected cats is even more important than it is for uninfected cats. Alert your veterinarian to any changes in your cat’s health as soon as possible.

• There is no evidence from controlled scientific studies to show that immunomodulator, alternative, or antiviral medications have any positive benefits on the health or longevity of healthy FIV-infected cats. However, some antiviral therapies have been shown to benefit some FIV-infected cats with seizures or stomatitis.

How long can I expect my FIV-infected cat to live?
It is impossible to accurately predict the life expectancy of a cat infected with FIV. With appropriate care and under ideal conditions, many infected cats will remain in apparent good health for many months or years. If your cat has already had one or more severe illnesses as a result of FIV infection, or if persistent fever and weight loss are present, a much shorter survival time can be expected.

My FIV-infected cat died recently after a long illness. How should I clean my home before bringing in a new cat?
Feline immunodeficiency virus will not survive outside the cat for more than a few hours in most environments. However, FIV-infected cats are frequently infected with other infectious agents that may pose some threat to a newcomer. Thoroughly clean and disinfect or replace food and water dishes, bedding, litter pans, and toys. A dilute solution of household bleach (four ounces of bleach in 1 gallon of water) makes an excellent disinfectant. Vacuum carpets and mop floors with an appropriate cleanser. Any new cats or kittens should be properly vaccinated against other infectious agents before entering the household.

Can I become infected with FIV?
Although FIV is a lentivirus similar to HIV (the human immunodeficiency virus) and causes a disease in cats similar to AIDS (acquired immune deficiency syndrome) in humans, it is a highly species-specific virus that infects only felines.

A number of studies have failed to show any evidence that FIV can infect or cause disease in people.

Why should I have my cat tested?

Early detection will help you maintain the health of your own cat and also allow you to prevent spreading infection to other cats.

Under what circumstances should FIV testing be performed?

• If your cat has never been tested.

• If your cat is sick, even if it tested free of infection in the past but subsequent exposure can’t be ruled out.

• When cats are newly adopted, whether or not they will be entering a household with other cats.

• If your cat has recently been exposed to an infected cat.

• If you’re considering vaccinating with an FIV vaccine.

This brochure was prepared by the American Association of Feline Practitioners and the Cornell Feline Health Center, Cornell University, College of Veterinary Medicine, Ithaca, New York 14853-6401. The center is committed to improving the health of cats by developing methods to prevent or cure feline diseases and by providing continuing education to veterinarians and cat owners. Much of that work is made possible by the financial support of friends. ©2002 by Cornell University. All rights reserved. Cornell University is an equal opportunity, affirmative action educator and employer.
Font Resize
Contrast
Accessibility by WAH